On April 27, 1976 a group of Deltas came together to determine the need for an Alumnae Chapter of Delta Sigma Theta Sorority, Inc. on the Monterey Peninsula. It was decided that a chapter in the area could serve as a viable force in meeting the needs of the community.

Through newspaper and radio announcements, and through personal contacts, the group gradually grew to the number necessary for chartering.

On December 18, 1976 the charter was officially presented to the Monterey Peninsula Alumnae Chapter by Soror Addie T. Haynes in a formal Chartering Ceremony at Stillwell Hall, Fort Ord, California making this the 567th chapter of Delta Sigma Theta Sorority, Inc., and the 36th chapter in the Farwest Region.

Following the Chartering Ceremony the first official meeting of the chapter was held. A slate of officers was presented to and installed by the Regional Director, Soror Haynes. They were as follows:

Visit the Farwest Region's at http://dstfarwestregion.com/. 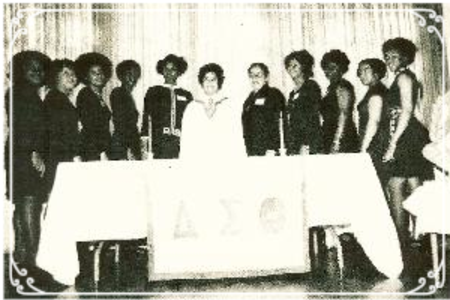